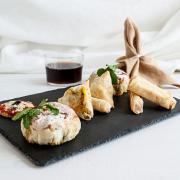 Pastilla has been voted one of the world’s great dishes.

It takes just one delightful bite to understand why. Pastilla epitomizes Moroccan cuisine, spicy and sweet, delicate and intriguing.

Pastilla is more labored than the dishes I usually share, but then this is a very special treat.

I admit I toast the almonds instead of frying them as is traditional, because I avoid frying at almost all costs, both for health reasons and ease of preparation. These individual hors d’oeuvres are smaller versions of the traditional larger Pastilla that arrives in great fanfare in a gorgeous earthenware dish, but at serving time these little gems are good to go. The pastilla ingredients are the same, but here they are arranged differently. Perfect for a first course or as part of a buffet, this dish is also ideal for parties and receptions.

In a food processor, grind the onions and the parsley to a puree. Transfer the ground mixture to a heavy wide bottom pot, and add the chicken, saffron, pepper, cinnamon sticks, turmeric and ginger. stir the mixture thoroughly. Bring to a boil. Reduce the heat to medium, cover and cook for 1 hour or until the chicken is tender, stirring occasionally to prevent sticking. Uncover, and add the cloves, cinnamon, sugar and cilantro. Increase the heat to high, stirring constantly until all of the liquid evaporates: (this is the secret of a good pastilla; any remaining liquid will make the fillo leaves soggy).

Remove the chicken pieces from the pot and set aside.

Add the eggs to the pot, and stir until the eggs look set and the mixture thickens. Discard the cinnamon sticks. Remove the skin, bones and any grit from the chicken, and dice small. Transfer the diced chicken to a bowl, add the egg mixture and the almonds and mix thoroughly. The filling is now ready (The filling can be prepared up to three months ahead and frozen, or up to two days ahead and refrigerated. Add the almonds only when ready to bake though, or they will lose their crunch).

Preheat the oven to 375*F. Cut the pile of fillo leaves crosswise into thirds. Take out two leaves, with the narrow side facing you. Brush the top leaf lightly with oil. Place one heaping tablespoon of filling down the center. Roll the fillo over the stuffing, part-way up, jelly-roll style. Fold the sides toward the center, and roll tightly all the way up. Place seam-side down on a greased cookie sheet. Repeat with the remaining leaves and filling, always working with two leaves at a time. Brush the rolls with oil.

Bake for about 35 minutes, or until golden brown and very crisp. Dust with confectioner’s sugar and cinnamon, if using, and serve hot. Allow about two pastilla rolls per person.