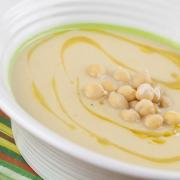 Chickpea soup is much dreamier than it sounds.

It is also nowhere near as plebeian as it sounds. Especially when you make chickpea soup, as I do, with all our wonderful Moroccan seasonings. The French term for chickpea is “pois chiches,” meaning something like pea’s poor relatives. Wow, if poor and modest could always taste like this chickpea soup (I for one think it always does), just give it to me! So many hummus joints have recently sprouted all over the city: chickpea spreads with all the fixings. But has anyone thought, as I did, about a liquid version? And completely vegetarian to boot? Rah-rah! By the way, chickpea soup is not entirely my invention, as we grew up with chickpea soup at home made with meat and served as a whole dinner.

But this meatless and no-less-delicious version is entirely my idea, and I am so proud of it I made it on a recent CBS morning show segment I was invited to. My plan was to knock their socks off with something very plebeian that tastes marvelous, and it worked beyond my expectations:

Is it any wonder that Moroccan food is my first and most lasting culinary love?

Bring all but last 2 ingredients to a boil in a wide-bottom pot. Reduce the flame to medium and cook covered for 2 hours. Add the lemon juice and the pepper. Cream until smooth with an immersion blender. Adjust the texture and seasonings. Makes a dozen ample servings.