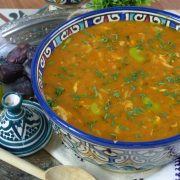 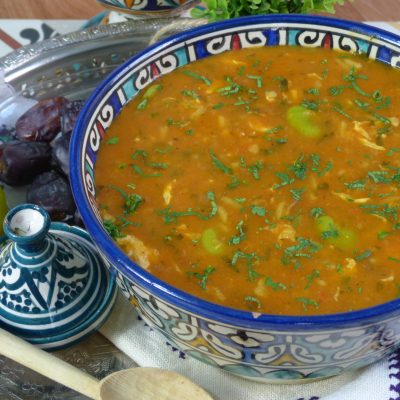 I believe I couldn’t live without it.

I love lentils, in any shape or form. This Moroccan Lentil Soup, and my Indian Red Lentil Soup, are among my favorite. This one is overlaid with our beloved Moroccan flavors. It is Gluten-free without even trying.

This soup costs pennies and takes minutes, and tastes like a million bucks. And it is a nutritional goldmine too. This is just so with many of our Moroccan soups: Just look at my oat soup or my fava bean soup: same wonderful thing! How can you miss with these assertive flavors?

Using the exact same base, you might want to substitute other grains for the lentils. The purpose is always to eat a great variety of nutritious foods. Just make sure the grain you select needs no soaking and doesn’t take longer to cook (barley, azuki, brown rice, mung, etc) All variations suggested below, except for the bulghur soup) are gluten-free. 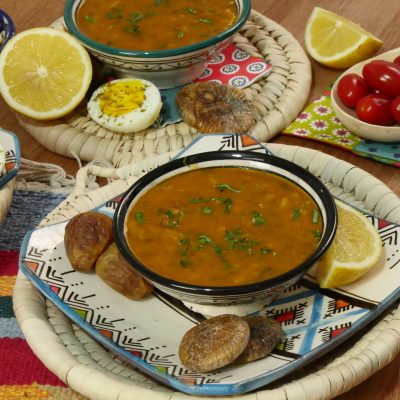 I have greatly streamlined the more labored classical recipe, even while it comes out no less delicious. I will start with the vegetarian version. Scroll down for the meat lentil soup variation!

Sephardi Jews like to make lentil soup during the week of Tish’a B’av, the commemoration of the Temple’s destruction. Recently, I was making lentil soup during the fast day of Tish’a B’av when my son Yakov called me, at around noon, from California where he was spending the summer. “How is your fast going?” I asked him. “Pretty good,” he answered. “It has just started. It’s only nine in the morning!” Less than five minutes later, my daughter, who was spending the summer as a counselor at a camp in Israel, called to say hello. I asked her how her fast was going. “Oh, Mommy,” she said, “I have a terrible headache! Thank G-d it’s almost over. It’s about seven in the evening. Just a couple hours left!” I had just spanned a whole day in a flash, thanks to my globetrotting children. 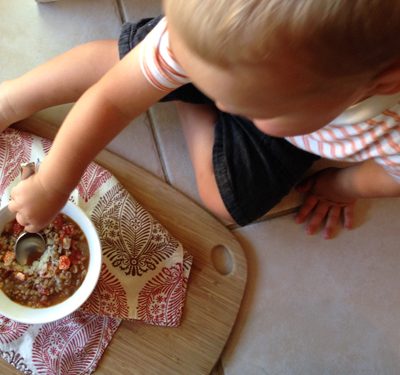 It is indelibly engraved in my memory as part of my childhood: Its name alone conjures up lovely scenes. The streets of Morocco are flooded with the heady aromas emanating from this wonderful lentil soup, Harira, during the whole month of Ramadan, and it is a delight to see everybody hurrying home to the dinner that awaits them after those long fast days. Every year I made a batch of lentil soup for one of our Manager Karim, at Levana Restaurant, during Ramadan. Seeing his eyes light up at the sight of the beloved brew is proof, every time, that being far from home is not so hard to bear if one can be reunited, however occasionally, with his comfort foods.

In a food processor, finely grind the onion, parsley, cilantro, and celery. Transfer the mixture to a heavy wide-bottom pot. Add the tomatoes, oil, salt, water, turmeric and lentils. Bring the mixture to a boil. Reduce the flame to medium and cook covered for 1 hour, or a little longer, until the lentils are perfectly tender and the soup looks thick and creamy.

- Buckwheat, bulgur, teff, steel-cut oat, or millet soup
These grains take only a few minutes to cook. Proceed with the recipe just as above, substituting 2 cups of the suggested grain for the lentils, but with one change: Add them in the last 20 minutes of cooking.

- Making the soup with meat.
Harira made this way constitutes the whole meal, with good bread and salad. Cook 3 1/2 pounds chunks shoulder cut beef or lamb and a few meaty bones, in 4 quarts of water, in a large wide bottom pot, for 2 hours. Then proceed exactly as instructed above. The liquid in the pot is your liquid for the soup (meaning, no water as instructed in the ingredient list), and the meat will continue to cook, together with the soup ingredients.