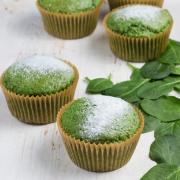 Did I just say this? Am I losing it or something? Nonono! Repeat: Kale muffins for dessert! My last (this) tinkering was a triumph! Seriously, think about it: Carrot cake, pumpkin cake, sweet potato cookies, rice cakes …. Why can’t kale muffins be next? This is real food, so go ahead and splurge, and hide them well from the kids, they might just wipe them out, and you might end up with a fantastic problem. Funky, nourishing and delicious: I have already tried my kale muffins on some kids: Not only did they love’em, but they got an added kick from the green color. I think I will make a batch for my grandchildren this Shabbos. And as always when I tinker with outrageous stuff, I’m not saying the K word till after dessert: You’ll create a sensation! by the way you can make them with baby spinach leaves too.

Who knew kale could be so delicious, in addition to being so nutritious? Read this link on Kale, from wellbeingsecrets.com, which gives you the whole scoop on kale, complete with delicious kale-based, dishes, three of them mine!

You’ll be amazed how elastic this recipe for kale muffins is!

This holds true for both and sweet and savory treats: Kale and apples are a great pairing, but take a look at all the variations at the bottom of the recipe.

Preheat the oven to 350 degrees.

In a food processor, process the first set of ingredients until smooth. Add the flour in 2 parts, pulsing each time only until combined. Fold in the raisins and the nuts with a spoon, right in the bowl of the food processor. Pour the batter into 11/2 dozen muffin molds (or 9x13 cake pan). Bake 45mn for muffins, 1 hour for cake, or a little longer, until a knife inserted in the center comes out clean.