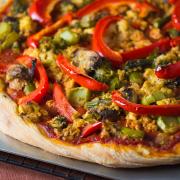 What an adventure it was, trying Gluten-free Pizza on my bread-chomping son Yakov!

Reb Yakov is the poster child for the meat-and-potato-and-lots-of-ketchup diet.

When he was little, his biggest compliment regarding my food was, “Delicious beans, Mommy. Almost as good as the baked beans from Eagle Day Camp.” (I couldn’t resist asking them for their recipe, and they graciously shared it with me: Heinz cans!) Ketchup takes up almost as much room on his plate as all the food combined. Years ago, our family was invited to our friends James and Georganne’s wedding, which I catered. “Did you bring ketchup?” Yakov asked me as everyone left the dance floor and headed to the buffet. I hadn’t. “Did you at least bring noodles?” he tried again tearfully. I hadn’t. In the huge elevator that carried the guests down from the party hall after the wedding, Yakov asked, in earshot of all the guests: “Everything except the food was great at James’s wedding, right, Mommy?” After that fiasco I took ketchup along wherever I went with Yakov, like asthmatic people carry a nebulizer. For his Bar Mitzvah, my kitchen staff bought him a giant (six-foot tall) ketchup bottle from a now-extinct store called “Think Big”.

Fast forward a couple decades: Yakov and his wife Elisheva are the Chabad Shluchim in Washington Heights and always have a full house. Not only because they are the nicest and most hospitable people you’ll ever meet, but because the Rebetzin feeds her congregants as well as she feeds her own family, with whole foods feasts every shabbos dinner. Yakov has just returned from our nephew’s wedding in Australia, and he was understandably exhausted on the day after his return from the other end of the world; when I asked him if he and his wife would rather meet us in a restaurant or have dinner at home, he opted for the latter, which had the added bonus of a visit to their delightful twins.  I had just given a demo on gluten-free and dairy-free Italian Feast the night before, which included gluten-free pizza, and was still riding high on the success of that improbable culinary proposition: I still had on hand all the required ingredients, so I decided to make individual gluten-free pizza pies much like the ones I made at my demo.

Had I forgotten Yakov’s multiple food quirks? Not exactly.

For a moment there, carrying my unfamiliar foods on the train, I thought (you know how foodies are) anyone will or at least ought to try anything as long as it’s good: My grandchildren always do, for G-d’s sake, so why not grownups, just this once?

As soon as we arrived at Yakov’s house, I got cracking, turned the oven on, put up the soup to warm, cut up some veggies for the salad, and…. started putting toppings on my pizza. And this is the precise moment Yakov walked in the kitchen. What is this you are making? he asked in horror. Pizza, I said brightly, keeping a poker face as I piled basil leaves, artichoke hearts, oil-cured olives, flaked mock crab on a rice-flour pizza crust. A polite smirk preceded his answer, Mommy, forget it, there’s no way I am eating gluten-free pizza, the way I know pizza is with tomato sauce and cheese, I am not going there, end of story. Elisheva, the health nut married to the food junkie, fastened on her resigned “what were you thinking?” look. Forgetting he is going on thirty, G-d bless, I tried a tired old trick: “Just taste! I’ll give you a dollar!” That didn’t get me anywhere: He just burst out laughing.

Well, dinner was in the oven, smelling delicious by the way, and my guest of honor, the prodigal son returned from Sydney, was ignoring my welcome-home feast. And this is when I decided to play my last card: do the mommy thing and use the mommy argument.

Yakov, for all the years you have been a rabbi, I have been eating without ever complaining or asking for preferential treatment every catered food you have brought to your kiddushes,  which is always my least favorite spread and which I come near only at your schul. I eat stuff you couldn’t in normal circumstances pay me to eat: greasy kugels, salty herring,  funky cholent, eggy challah, stale kichels. Oh no not because I enjoy it, but only for one reason: to accommodate you!

Would you believe, THAT did it! So last night, Wednesday June the second, marks the day my son ate  some strange food never before known to him as his beloved pizza, only shaped as one, for one reason only: Rabbis – and good sons – can’t resist a compelling argument: They just can’t help it! We enjoyed dinner and the togetherness, and he ate his entire pie. OK,  he removed some of the olives and artichoke hearts to make his burden somewhat lighter, but having just scored a victory, good Mommy that I am, I decided to cut him a little slack and ate them to remove any remaining evidence of filial defiance.

So, would you like to try my gluten-free pizza recipe?

And now that I have won my argument, let me make a revelation that would have been most inconvenient to make at the time I was piling up my points to make my case: My son makes a fabulous cholent for his schul every single shabbos, in a gigantic crock pot; it gets wiped out each time. When we spend Shabbos there, no trace of the offending garlic powder in the cholent, instead he throws in a couple heads whole garlic (what’s the problem? costs pennies, takes seconds!) It looks like it might grow on him even on weeks when I am safely away.

How does it feel to convert a Rabbi to Gluten-free pizza?

Hmmmm, it was quite an adventure! Probably as hard as it is for a Rabbi to convert recalcitrant shul goers into enthusiastic regulars. We’ll do it again sometime soon, OK Rabbi? Let me just recover from this one! Who knows what I will try to ram down your throat next time for dinner? No no no I am not telling! I will surprise you!

Here it is my gluten-free pizza recipe again: